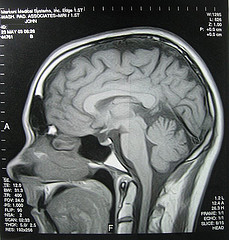 Our relentless mapping of our own grey matter continues, and here’s the latest result:

Researchers have found a telltale mental signature that predicts whether an experience will be remembered. Once deciphered, the signals could be used to help people know when their brains are primed to remember, perhaps using an iPhone app.

It doesn’t sound all that impressive, does it, even with the flippant mention of  JesusPhone compatibility further down the line – it’s easy to become blase about these stories when you collect them every day. Technology that monitors and interacts with the brain is becoming commonplace, but the real implications here are surely far bigger than having a PDA tell you when you’re primed for memory tricks.

Biofeedback, for example. Wire someone up to an EEG, and eventually they can consciously control the lines on the screen by watching them; so, with more complex monitoring systems, think of all the other stuff you could train a brain to do better. With memory as an example, perhaps you could train yourself to be in a highly receptive state at all times – that would be a pretty handy skill for spying without carrying any hardware.

But then there’s the flipside – you could train for forgetfulness too, which might make stories like Marissa’s “Erasing the Map” into reality. And the more we learn about the mind as a ‘black box’ system, the closer we come to being able to simulate one on non-biological hardware – which is one of the steps that Kurzweil and others claim are part of the road toward true Artificial Intelligence and brain uploading… [image by jsmjr]