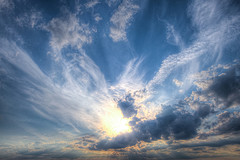 While the needle-in-a-haystack search for life on other planets continues, we still consistently find new lifeforms on Earth when we look in the right places. Our oceans are still a source of biological mystery, but that’s not the only place that extremophile life can be found: the Indian Space Research Organisation recently announced the discovery of new bacterial species in the stratosphere:

Three bacterial colonies, namely, PVAS-1, B3 W22 and B8 W22 were, however, totally new species. All the three newly identified species had significantly higher UV resistance compared to their nearest phylogenetic neighbours.

“So what,” you may be thinking. Well:

The precautionary measures and controls operating in this experiment inspire confidence that these species were picked up in the stratosphere. While the present study does not conclusively establish the extra-terrestrial origin of microorganisms, it does provide positive encouragement to continue the work in our quest to explore the origin of life.

Another potential prop for panspermia? [via SlashDot; image by country_boy_shane]

One thought on “New-found native life in the stratosphere”