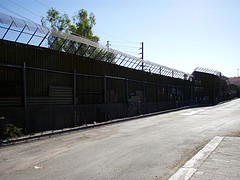 Here’s an odd twist on crowdsourcing; the publicly-accessible cameras along the Texas-Mexico border have attracted amateur border guards from a number of the southern states… and beyond. In fact, it seems to be quite the international pastime:

So far, more than 100,000 web users have signed up online to become virtual border patrol deputies, according to Don Reay, executive director of the Texas Border Sheriffs’ Coalition, which represents 20 counties where illegal crossings and drugs and weapons smuggling are rife.

“We had folks send an email saying, in good Australian fashion, ‘Hey mate, we’ve been watching your border for you from the pub in Australia’,” he said.

Not everyone is quite so impressed, however, especially considering the system’s cost measured against its successes:

Opponents have dismissed the project as “the perfect Google border” and say the cameras do little to deter criminal activity. “Border security deserves trained professionals, not pub-goers in Perth,” said Eliot Shapleigh, a state senator from El Paso, Texas, who claims that the programme has resulted in only a handful of arrests. “It’s wholly ineffective for the governor’s stated goal of security, it panders to extremists for political purposes and it’s not an effective use of $2m for just three apprehensions.”

One has to wonder whether all the people who’ve signed up to watch the border are sincerely interested in reporting transgressions rather than turning a blind eye to them; the barriers to entry are pretty low, after all, and not everyone wants to take America’s side these days. [image by Daquella manera]

But what interests me most about this story is that it seems to highlight one of my current obsessions, namely the fragmentation of nation-states into parts that borders on a map just can’t represent. If an Australian is voluntarily watching a piece of land at the edge of Texas (which, a long time back, was part of Mexico) to make sure that no Mexicans (or Guatemalans or Hondurans or anyone else) cross that fence-line, could he not be considered a temporary US citizen? Or is he merely a form of contractor, or neither?

Think about it – to enforce a geographical boundary, the US is using tools that contribute to the ongoing erasure of geography; meanwhile, non-citizens on the other side of the globe do work that a citizen would need to be security-screened for… and do it for free, or for kudos. What does being a citizen actually mean, beyond defining who you pay your taxes to? Where does citizenship actually take place – on the ground, in our own minds, or in the network of mutual assumptions that we call society?

Isn’t it possible that one day that one way to cross the conceptual border of the US and become a citizen thereof would be to have spent a considerable amount of time and effort ensuring that other people didn’t cross the geographical border?

[26/03/09 – Note: it has been brought to my attention that the term ‘wetback’ is a lot more fundamentally racist than I – unused to some of the subtleties of US slang – initially thought; had I thought it referred to anything more than person who attempts to cross the Rio Grande, I wouldn’t have used it, and I’d like to apologise for any offence caused.]