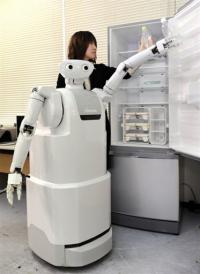 News that Japanese company Toshiba are developing a houskeeping robot – ApriAttenda – designed specifically to care for the elderly:

Japan, with a high life expectancy and low birth rate, faces a shortage of caregivers for elderly people and has loosened its tight immigration rules to invite hundreds of nurses from the Philippines and Indonesia.

“As aging of the population is a common problem for developed countries, Japan wants to become an advanced country in the area of addressing the aging society with the use of robots,” the official told AFP.

It also occurs to me that I’m due to shuffle into codgerhood around circa 2060. I wonder what fifty years of R&D on ApriAttenda, or this, could lead to…

[image and article from Physorg, Engadget, and this comment at Charlie’s Place]