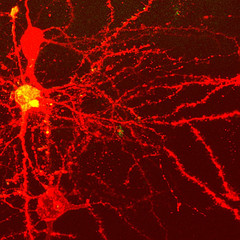 Most attempts to simulate the function of organic brains using computers have been software simulations – models built with code, if you like. An international team of computer scientists have been trying the other approach, however: building computer hardware that mimics the dense interconnection of brain cells.

The hope is that recreating the structure of the brain in computer form may help to further our understanding of how to develop massively parallel, powerful new computers, says Meier.

This is not the first time someone has tried to recreate the workings of the brain. One effort called the Blue Brain project, run by Henry Markram at the Ecole Polytechnique Fédérale de Lausanne, in Switzerland, has been using vast databases of biological data recorded by neurologists to create a hugely complex and realistic simulation of the brain on an IBM supercomputer.

The advantage of this hardwired approach, as opposed to a simulation, Karlheinz continues, is that it allows researchers to recreate the brain-like structure in a way that is truly parallel. Getting simulations to run in real time requires huge amounts of computing power. Plus, physical models are able to run much faster and are more scalable. In fact, the current prototype can operate about 100,000 times faster than a real human brain. “We can simulate a day in a second,” says Karlheinz.

A day in a second, huh? That’s straight out of your favourite Singularity sf story, right there. [image by neurollero]

Transhumanists talk a great deal about the inevitability of human-equivalent artificial intelligence in the very near future, and it’s easy to dismiss them as dreamers until you read an article like this. I’m not saying that silicon brainware means the Singularity is inevitable, or even likely… but I think I’ll start learning to speak in machine code. Y’know, just in case.

2 thoughts on “The silicon brain”