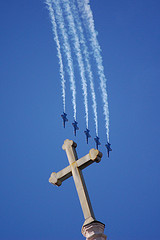 OK, this is a fairly short three minutes of video but it’s not available in an embeddable format, so please take a moment to watch a chap called Martin Lindstrom talking about his somewhat controversial research, in which he brainscans consumers while showing them images of religious iconography in between logos of the biggest  and most auspicious lifestyle brands.

Now, the comparison of brand loyalty and religion is far from being a new idea (didn’t Ballard write some stories around something like that?), but I’ve only ever encountered it as a literary metaphor; to see that the advertising industry is researching it in detail isn’t surprising so much as it is a little alarming. [image by laverrue]

The marketing business focusses on what actually works; if something doesn’t get a good ROI, it gets passed over in favour of something that does. Meanwhile, over the course of centuries, the major religions have evolved an astonishing ability to extract loyalty, unswerving devotion and financial contributions from their adherents… which must make them a fairly appealing business model to emulate, no?

Brand loyalty and conspicuous consumption are old news – you can see it on any street in any city in the world, with people wrapped in logo-blazoned clothing (be it genuine or fake). So is the notion that word-of-mouth is the best form of marketing there is. The “street team“, however, is comparatively new, as are social networks… but they can (and probably will) converge with the preceding phenomena very quickly indeed once the right brain-triggers have been unearthed.

Are we ready for brand evangelism? If you find the doorstop importunings of your local church an intrusion, how will you cope with people dropping by to ask “whether you’ve thought about Harley-Davidson today?” [via No Fear Of the Future]