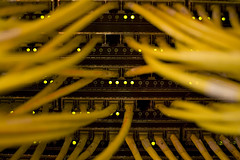 So, the big red-hot knee-jerk story of the week is surely the suggestion that there’s a possibility that maybe some foreign countries are thinking about whether it would be worth hacking the poorly-secured United States power grid infrastructure with computer intrusion techniques. Maybe.

… multiple countries are believed to be behind the attacks, including both the Russians and the Chinese. Some of these were apparently detected and stopped before any damage could be done, while the remains of others (and tools designed to trigger failures) have been found in other areas. The article doesn’t give specific information on where issues were and weren’t detected, or which infrastructures were contaminated, but the list of “at-risk” institutions include electric plants (particularly nuclear ones), financial networks, and water management/treatment facilities.

Credit where it’s due, Ars Technica isn’t going to flap its arms and panic like some other news sources:

The Internet is merely the latest—and by most measures, the most benign—means by which one country could attack another. Personally, given the choice between ICBMs, chemical weapons, “the bomb”, or V-2 rockets, I’ll take the Internet.

Right. And why worry about complex hacks when a crew with some industrial tools can wipe out the data grid for a whole region?

Ten fiber-optic cables carrying were cut at four locations in the predawn darkness. Residential and business customers quickly found that telephone service was perhaps more laced into their everyday needs than they thought. Suddenly they couldn’t draw out money, send text messages, check e-mail or Web sites, call anyone for help, or even check on friends or relatives down the road.

Several people had to be driven to hospitals because they were unable to summon ambulances. Many businesses lapsed into idleness for hours, without the ability to contact associates or customers.

The dogs in your own backyard are more likely to bite you than your neighbour’s. [image by jonbell]