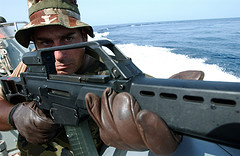 2 thoughts on “War-porn for the week – smart bullets”