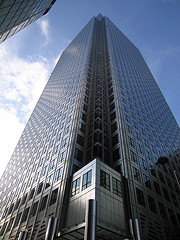 Jason Stoddard has gotten tired of stories and novels featuring shadowy and nefarious mega-corporations seeking to enslave the globe, and with good reason – it’s just not a realistic or logical thing for a corporation to do, and it’s becoming a modern iteration of the moustache-twirling Snidely Whiplash villain cliché. [image by victoriapeckham]

While we’re on the subject of capitalist economics, ethics and prosperity, here’s Matt Ridley at Wired UK explaining why robber barons always end up on top – it’s because they find ways to make things cheaper for you, the consumer:

It’s still happening today. Wal-Mart, Aldi and Ryanair won their market shares by ruthlessly charging us viciously lower prices. And here lies a cause for optimism in the midst of this recession. Even though jobs are being lost, houses repossessed and firms bankrupted, the underlying deflation caused by innovation is still going on – indeed, on the web, it’s accelerating. All over the internet, people are dreaming up ways of making things available to you more cheaply, more conveniently, more copiously and more quickly. That is what will cause prosperity to return one day.

That’s a brave op-ed, given the current econo-political climate, but I suspect he’s at least half right. However, I was somewhat amused to note that Ridley’s masthead note says he was a non-executive chairman for Northern Rock for three years; make of that what you will. 😉

5 thoughts on “Writing the mega-corporation realistically”