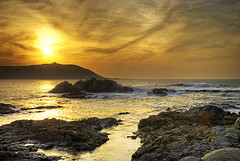 … new calculations – made possible by the discovery of “[Gliese 581] e” – show that the larger planet is squarely within the so-called “habitable zone,” neither too far nor too close to the star around which it orbits to support life.

“Gliese 581 d is probably too massive to be made only of rocky material, but we can speculate that it is an icy planet that has migrated closer to its star,” said co-author Stephane Udry, a professor at Geneva University, in Switzerland.

“It could even be covered by a large and deep ocean – it is the first serious ‘waterworld’ candidate,” he said.

A waterworld, eh? As Gareth L Powell put it, maybe we should dispatch Kevin Costner immediately…

More seriously, a wet Gliese 581 d is only a possibility as yet, but it’s a possibility that shifts the odds on there being life elsewhere in the universe. When (or perhaps I should say “if”) we manage to confirm the presence of liquid-phase water on other planets, we’ll have to concede that the likelihood of life evolving elsewhere is not as remote as was once thought… which will doubtless be immensely upsetting to some people, but makes me feel pretty good. [image by Paulo Brandão]