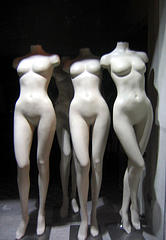 Cloning stories are like buses; you wait for ages, then three come along at once. This has been one of those weeks, it appears, with the tale of yet another outsider scientist claiming to have successfully cloned a human being taking the lion’s share of the spotlight. [image by antmoose]

New Scientist takes a look at the way self-styled pioneers like Zavos court media attention for their activities, and calls them out as – at best – manipulative and misleading:

It doesn’t help that the latest coverage includes a picture of a little girl killed in a car crash – and whose cells were cloned through hybridisation purely for study – alongside a headline in the paper describing her as “The little girl who could ‘live’ again”.

This perpetuates the cruel myth and widespread misconception that cloning is a way of raising the dead. In fact, if it worked, it would simply be a way of creating an identical twin of whoever was cloned, but separated in time.

To some extent, science fiction can be blamed for misconceptions about cloning. The more serious and thoughtful books on the subject have been somewhat overshadowed by sensationalist TV and movie plots or the technophobia of writers in the Michael Crichton mould.

But that’s not for want of the facts being available; as the known sf geek in my local social circle, people ask me about topics like cloning quite a bit, and I try to give them the most realistic overview of the topic I can. It rarely works. The truth is not as compelling a story as a rogue-science thriller or a riff plucked out on the heart-strings. Perhaps I’m just not a good enough storyteller.

But hey – at least we get some cute headlines alongside the shock-horror stories and emotional grandstanding of hucksters. Look – glow-in-the-dark puppies!