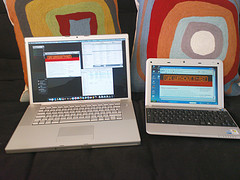 This speculative futurism thing is starting to spread! Keir Thomas, Linux columnist for PC World, has posted a future retrospective piece that looks back from 2025 to the present day as the dawn of “good enough” computing… and the beginning of the end for Microsoft.

The lack of desire to relinquish XP by users was part of what became known as the “Good Enough” revolution in both software and hardware. At the beginning of the 21st century, computing hardware had evolved sufficiently to reach a level of performance that allowed for speedy execution of virtually all common computing tasks. Prior to this, the only way to guarantee good performance was to buy expensive cutting-edge hardware. But now chips costing just a few dollars offered more performance than most people would ever need.

Upgrading became less a matter of getting a better PC than about simply replacing old and broken computers with newer models. Ever resourceful during the Great Recession that struck in the early 21st century, PC manufacturers responded with ultra-cheap but “good enough” computers (both laptops and desktops) that were designed to be simple slot-in replacements for existing computers. PC manufacturers had already carved this route with netbook computers, where the goal was to be cheap and usable, with little if any frills.

Obviously there’s an element of fun-poking to Thomas’s piece (alongside the enduring positivity of the committed Linux evangelist) but as a piece of speculative futurism it’s a solid and plausible job. The details may well work out differently – and I’d be surprised to see even the recently-beleaguered Microsoft drop out of the game quite that easily – but the idea of computing as commodity was raised by Charlie Stross a year and a half ago, and many others since. As the line between mobile devices and ‘proper’ computers continues to blur (and convergence with phone handsets accelerates), Thomas’s future doesn’t look too fictional at all. [via the spiritual home of the Linux-takes-all story, SlashDot; image by Matthew Verso]

One thought on ““Good enough” computing – will the recession kill off Microsoft?”