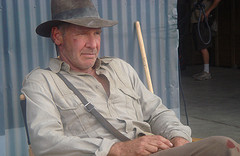 The rise of eBay and similar online marketplace has been a death-knell for a number of industries and a boon for others… but not always in the way that people expected. Archaeologists the world over deplored the arrival of eBay, fearing it would make the trade in rare looted antiquities even harder to control. It turns out, however, that exactly the opposite has occured:

Our greatest fear was that the Internet would democratize antiquities trafficking and lead to widespread looting. This seemed a logical outcome of a system in which anyone could open up an eBay site and sell artifacts dug up by locals anywhere in the world. We feared that an unorganized but massive looting campaign was about to begin, with everything from potsherds to pieces of the Great Wall on the auction block for a few dollars. But a very curious thing has happened. It appears that electronic buying and selling has actually hurt the antiquities trade.

How is it possible? The short answer is that many of the primary “producers” of the objects have shifted from looting sites to faking antiquities. I’ve been tracking eBay antiquities for years now, and from what I can tell, this shift began around 2000, about five years after eBay was established.

Not only that, it appears to have encouraged a growing market for cheap imitations of antiquities:

The economics of these transactions are quite simple. Because the eBay phenomenon has substantially reduced total costs by eliminating middlemen, brick-and-mortar stores, high-priced dealers, and other marginal expenses, the local eBayers and craftsmen can make more money cranking out cheap fakes than they can by spending days or weeks digging around looking for the real thing. It is true that many former and potential looters lack the skills to make their own artifacts. But the value of their illicit digging decreases every time someone buys a “genuine” Moche pot for $35, plus shipping and handling. In other words, because the low-end antiquities market has been flooded with fakes that people buy for a fraction of what a genuine object would cost, the value of the real artifacts has gone down as well, making old-fashioned looting less lucrative. The value of real antiquities is also impacted by the increased risk that the object for sale is a fake. The likelihood of reselling an authentic artifact for more money is diminished each year as more fakes are produced.

Good news for the defenders of history. Of course, the game will change again once we have widespread fabrication technology; will there be a point at which fakes and close copies become so ubiquitous and easily available that the kudos value of the real thing becomes too appealing to resist for those with a bulging wallet and something to prove? [via SlashDot; image by John Griffiths]