Well, we’ve all had a few days to take a look at the specifications and hear the debates, so it’s time to ask – would you consider buying the new Kindle DX? If not, why not? 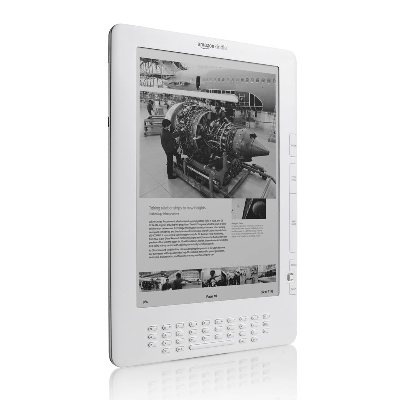 Frankly, if I had the money to hand I’d order one now – in full knowledge that something better will be along in a year and make me regret it. They’ve just passed the utility point past which my early-adopter organ starts releasing the hormones; PDF compatibility is the big issue for me, second to a bigger screen size, though apparently there is a small charge for sending a PDF through the system to your device (which is a bit cheeky). Lucky I’m skint right now, I guess… but this is surely much closer to a game-changer device than the last iteration, not to mention easier on the aesthetic eye. What do you think?

Bob Lefsetz seems to agree with me:

The Kindle breeds excitement.  At your fingertips is a breadth of excitement and knowledge.  My little device is always at the ready, and calls me not only at night, but during the day, to delve into a story that tells me so much about the world but is not laden with the hit and run facts of today’s infotainment society.

Fiction tells you more about life than non-fiction.  All these years later, to rediscover the experience of reading stories is thrilling.

But I don’t expect the mainstream to join me on my adventure quite yet.  The buy-in price of the device is way too high, $349.  And the new Kindle, $489, this is not something for the masses!

Kindles are getting more expensive.

Buy the third or fourth generation.  Maybe the fifth.  The ergonomics will be better and the price will be lower.

Granted, Lefsetz’s experience is in the music industry, but I (and he) still hold that the similarities between the two industries are strong, albeit with change occuring in the book industry at a somewhat more manageable pace. The writing is on the wall… or rather on the screen. 😉

But the response on everyone’s lips seems to be “ooh, just wait until Apple put out a tablet device!” I’d agree that if Apple can nuke the punch-bowl in the same way they did with the iPod, they’ll be onto a winner… but I’m not sure they care enough about books as an industry. Everyone listens to music, and you can listen to music while doing something else; neither of those factors apply to reading. Reading is a very different (and smaller) lifestyle niche, and I’m not sure the iPod business model would scale in the same way.

Furthermore, an Apple tablet will doubtless do loads of other fancy latte-sippin’ Apple stuff as well, and doubtless have the fashionably high price tag to match… so while I’m not feeling the Kindle DX as the apogee of ebook tech, I’m not expecting Steve Jobs and company to lead the field either. My money’s on someone else coming up with a more open and utilitarian platform at a lower price; that’s when things are going to get really lively. [image courtesy Engadget]

2 thoughts on “Would you buy a Kindle DX?”