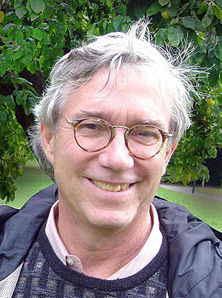 Rudy Rucker is one of the authors I go out of my way for, so I’m stoked to see he’s guest-posting at BoingBoing for a couple of weeks; he’s kicked off today with a brief introduction to his “gnarly” plotting methods.

Experience  shows that Rucker’s fiction divides opinion sharply between those who love it and those who loathe it; I’m firmly in the former camp, though I think I understand what it is about transrealism that puts others off. [image courtesy Wikimedia Commons]

That said, he’s got lots of interesting and weird stuff to say outside of his stories: he’s a professor of mathematics with a psychedelic outlook, he was a core member of the cyberpunk movement (which means he has some great tales to tell about the other characters involved) and he’s got a unique eye for photographing the mundane and making it seem alien. Go pay him some attention; you may not agree with him, but I defy you to be indifferent!

So, any other Rucker fans in the house? Which story or novel would you recommend to a newcomer to Rucker’s body of work?