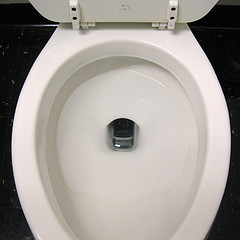 If you want futurist thinking that looks at the little things rather than the large, you can’t do much better than to follow Jan Chipchase as he bounces around the world researching how people use things… and how things use people.

Here’s a prime example of science fictional thinking processes applied to that most everyday of objects, the toilet.

… the light blue rinse that you see above is an indicator of what is, ahem, yet to pass. The colour of the liquid in the toilet bowl will be the most commonly used mechanism to feedback relatively minor but good-to-know status updates about the state of your body, a simply chemical adaptation of what many of you already do today. (The critical stuff will sent directly to your doctor/insurance company, so that they can break the news to you gently, unless of course you think you can handle staring down at a blood red toilet bowl).

Given human limitations – whether its remembering which colours are associated with what, to our ability to effectively distinguish between colours, what are the other parameters can will be put into play by tomorrows porcelain experience designers?

Where does this lead to in the future perfect? Lower insurance premiums for your employer when they install (and allow the remote monitoring of) your [insurance company] sponsored washroom. Automated devices travelling the sewage systems monitoring dye pigmentation by sewage outlets of the stars? That you are willing to walk an extra three blocks to use a unmonitored public toilet.

Given the UK government’s seemingly unstoppable obsession with monitoring its citizens and telling them how to live, it’s almost depressing how plausible Chipchase’s speculation seems from where I’m sat right now – even though I suspect it’s meant to be somewhat tongue-in-cheek. Insert your own joke about “the power behind the throne” here…

Though it should be noted that science fiction pipped Chipchase to the post on this one; “Alone With an Inconvenient Companion” by Jack Skillingstead (as anthologised in Fast Forward 2) features hotel urinals that provide the protagonist with a ‘complementary urinalysis’. Or at least he thinks they do. [image by jurvetson]