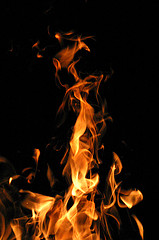 Because there’s still got to be an optimistic sf story in here somewhere:

Harvard anthropologist Richard Wrangman theorizes that cooking with fire triggered hominids to evolve into humans. His experience in the wild led him to conclude that humans could never live on what chimpanzees eat. Cooking, he thinks, might account for the sharp rise in brain size, and the decrease in the size of teeth, that occurred about 1.6 million years ago in Homo erectus over its predecessor, homo habilis. It might explain our relatively small guts and weak jaws, not to mention certain preferences that seem innately human:

[O]ne of the fascinating things for me as I ventured into this was really learning about what hunters and gatherers eat—and it turns out that there are no records of people having a large amount of their food come from raw food. Everywhere, everyone expects a cooked meal every evening.

The problem is lack of evidence that people used fire that long ago. A lot of scientists believe cooking didn’t really start till only 500,000 years ago.

Lacking the proof for widespread fire use by H. erectus, Wrangham hopes that DNA data may one day help his cause. “It would be very interesting to compare the human and Homo erectus genetics data to see when certain characteristics arose, such as, When did humans evolve improved defenses against Maillard reaction products?” he says, referring to the chemical products of cooking certain foods that can lead to carcinogens.

Human origins have been in the news.  How and when we began is a source of wonder. Call me mammal-centric, but I found it impossible to look at the (eerily well-preserved) face of the newly unearthed lemur-like fossil without feeling a bit of kinship.