The cover looks pretty exciting, doesn’t it? A flame-haired naked woman with a boomerang on her head standing in a big gold cauldron firing rockets from her fingertips into some cooking pots from which gigantic strands of frogspawn depend – how could that not be brilliant? 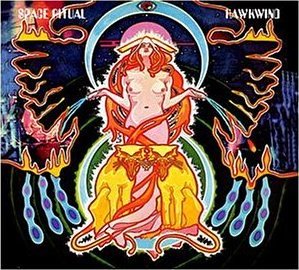 This is what that invaluable research resource Wikipedia has to say about space rock:

Several terms in that nicely concise description leap out at us, I think. For instance the words ‘slow‘, ‘lengthy‘ and ‘instrumental‘. Words to quicken the pulse of any music lover, surely. What could be more exciting? Slowness? Prolonged length? Too too thrilling!

And then there’s the ‘experimental guitar work.’ I’d say the crucial part of this phrase is the work part. Should playing, or indeed listening, to pop music be, let’s say, I don’t know – fun? By no means! It must be laborious, continuous, effortful work. Work! Work! Work!

Space Ritual is a two-disc, prolonged improvised space-rock ramble. It’s what musicians call ‘a jam’, not, in this case, so much on account of its spontaneous musical co-ordination as for the fact that it’s sticky and hard to wade through. It truly goes on and on. And then it goes on some more. It chugs. Then it chugs some more. There are sung bits. Here, for instance, are the lyrics to track 1, “Earth Calling”:

The longer you listen, the more the urge rises within you to shout ‘Oh pick up, for Christ’s sake! Pick up the phone! Earth is calling, don’t you hear?’

And then there are talky bits. These could more accurately be described as ‘long, long talky bits’. Or, ‘ponderously-intoned talky bits’. Written by Michael Moorcock no less.

This was reality, however grim:
Our journey’s end. The landing itself
Was nothing. We just touched upon a shelf
Of rock selected by the Automind.
And left a galaxy of dreams behind.

This doesn’t look too bad, written down, I agree; but you need to remember that it is (a) spoken rather than sung, and (b) spoken in a quasi-autistic monotone. For example, the phrase ‘this was reality’ is delivered as ‘this, was, re, ah, li, tee‘, every syllable the same length and same pitch, which makes the whole thing sound very unlike re, ah, li, tee indeed.

Don’t misunderstand me. My problem with this album is not that it is prog. The continent of Europe contains within it no bigger fan of prog than I. But prog needs a certain play, a certain dash and dance, a certain widdly-fiddly rapid arpeggio flourish. It needs to be less sticky, and less jammy. It needs more hawk, and less wind.