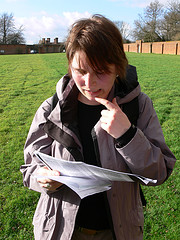 Got a GPS in your car? Well, I hope you’ve not become too reliant on it and totally lost the ability to use old-fashioned road maps, because GPS service could start getting patchy next year, when the ageing satellites that make up the system’s infrastructure start falling out of orbit before their replacements can be set up.

Seems like someone’s been blowin’ the boondoggle blues and letting the maintenance schedule slip behind:

The warning centres on the network of GPS satellites that constantly orbit the planet and beam signals back to the ground that help pinpoint your position on the Earth’s surface.

The satellites are overseen by the US Air Force, which has maintained the GPS network since the early 1990s. According to a study by the US government accountability office (GAO), mismanagement and a lack of investment means that some of the crucial GPS satellites could begin to fail as early as next year.

“It is uncertain whether the Air Force will be able to acquire new satellites in time to maintain current GPS service without interruption,” said the report, presented to Congress. “If not, some military operations and some civilian users could be adversely affected.”

The report says that Air Force officials have failed to execute the necessary steps to keep the system running smoothly.

Ouch. As pointed out in the Guardian article, it’s highly unlikely that the USAF will let the system degrade totally – it’s too useful, not just to them but to a lot of people the world over – but just as we have to accept with other ubiquitous services like Google, outages may occur, and there’ll be no one to complain to; it’s all there in the small print, man. [image by Larsz]

That said, it’s a free market, and you can always shop around for alternatives – apparently Russia, China and India are all working on their own equivalent systems, which is probably even more upsetting to the USAF than the possibility of flakey service from their own kit.