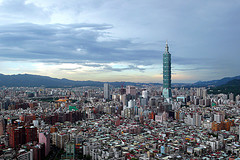 More statistical sensawunda in the urban environment. Remember us mentioning that guy who suggested that cities can be considered  as super-organisms? Well, a mathematician chap called Stephen Strogatz dropped into the New York Times blogs to talk about Zipf’s Law and other statistical phenomena that surround our urban environments:

The mathematics of cities was launched in 1949 when George Zipf, a linguist working at Harvard, reported a striking regularity in the size distribution of cities. He noticed that if you tabulate the biggest cities in a given country and rank them according to their populations, the largest city is always about twice as big as the second largest, and three times as big as the third largest, and so on. In other words, the population of a city is, to a good approximation, inversely proportional to its rank. Why this should be true, no one knows.

The same pattern holds for other measures of infrastructure. Whether you measure miles of roadway or length of electrical cables, you find that all of these also decrease, per person, as city size increases. And all show an exponent between 0.7 and 0.9.

Now comes the spooky part. The same law is true for living things. That is, if you mentally replace cities by organisms and city size by body weight, the mathematical pattern remains the same.

It looks as if there’s a lot of things that mathematical analysis could tell us about the cities we live in. The question is, are these properties inherently emergent, or could we design our urban environments more effectively and adjust some of those efficiency values in the process? [image by tylerdurden1]