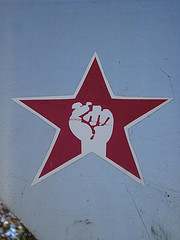 Even now, US resistance to the concept of socialism is a knee-jerk of epic proportions, at least among the more vocal ranks of punditry. But maybe it’s coming anyway – Kevin Kelly crops up at Wired, claiming that the internet is fostering a grassroots variant of technology-enabled collectivism deep in the heart of America… and beyond.

The type of communism with which Gates hoped to tar the creators of Linux was born in an era of enforced borders, centralized communications, and top-heavy industrial processes. Those constraints gave rise to a type of collective ownership that replaced the brilliant chaos of a free market with scientific five-year plans devised by an all-powerful politburo. This political operating system failed, to put it mildly. However, unlike those older strains of red-flag socialism, the new socialism runs over a borderless Internet, through a tightly integrated global economy. It is designed to heighten individual autonomy and thwart centralization. It is decentralization extreme.

It’s an interesting and provocative read, and I heartily recommend you take twenty minutes to read it all.

What I find most intriguing about it, though, is the fact that most of the article would work just as well if you replaced every instance of the word “socialism” with the word “capitalism”. That doesn’t invalidate Kelly’s argument, though; what I think it means is that the old polarity between the ideas encapsulated by those two words is weakening; both socialism and capitalism as ideologies have taken some serious blows in the last sixty years or so, but the underlying systemic approaches to examining and adjusting the way huge numbers of people live that lurk beneath those political edifices are increasingly looking like complementary models or theoretical frameworks, much like you’d find in science.

Which isn’t to say that people won’t crusade under the banner of a scientific theory – look at the new wave of militant evolutionists, for example. But it suggests to me that social economics may gradually be coming detached from the binary oppositions of geopolitics; as awareness of the flaws and benefits of both approaches become clearer and more widely disseminated (thanks to the web, natch), perhaps it will become harder for politicians to claim that one or the other is “right”, “better” or “more American” (or British, or Chinese, or whatever). [image by anarchosyn]

Hey, a guy can dream, right?

One thought on “The web as emergent collectivist digitopia”