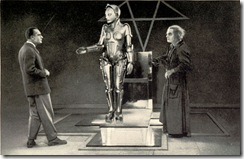 h+ Magazine conducted a poll of “roboticists, AI workers, SF writers, and other techie types” (the SF writers were David Brin and Vernor Vinge) to see if they thought a “Terminator-like scenario” was possible, and if so, how likely it was. (Via KurzweilAI.net.)

Boiling it down (read the whole thing here), the consensus seems to be 1) forget about the time travel; 2) don’t expect a super-intelligent Skynet to spontaneously awaken and start wiping us out (though rather alarmingly, it was generally thought that was just “highly unlikely,” not flat-out impossible); but 3) do expect a future full of robots, both beneficial and warlike–though in the latter case, the intelligence directing them is likely to be humans of a destructive bent, rather than an AI with its own designs on the planet.

Knowing what humans are capable of, this is not much comfort.

Even though I am by nature optimistic.

One thought on “Is a Terminator scenario possible?”