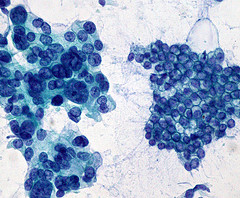 In the Western world at least, cancer is one of our most intractable enemies; medical science has advanced hugely in the last half-century, and cancer mortality rates have fallen as a result of preventative measures, but the essential approach remains the same as it ever has been – eradicate the tumour cells from the body at any cost.

Mathematical oncologist Robert Gatenby reckons that’s the wrong route, though. He suggests that rather than doing our utmost to purge cancer from the body, we should instead seek to reach a form of compromise with it – playing it to a stalemate, in other words, treating it as an inevitability to be controlled rather than an alien incursion to be expelled.

How people treat invasive species can provide an analogy for thinking about cancer therapy. In treating a field for a pest, for example, you might treat three-quarters of it with a pesticide, and leave the other quarter untreated. Pesticide-sensitive pests remain there, and they spread out into the field after treatment, preventing pesticide resistance from becoming dominant.

Using pesticides on an entire field is like what we’re doing with cancer now. And we all agree that we’d rather get rid of the pests altogether, but if you can’t do it, if every time you have an infestation you treat it and get resistance, then you try a different strategy. The alternative is to try to reduce the pest population so that it doesn’t damage your crop, and accept the fact that they’re going to be there. That’s what I’m talking about with cancer.

There’s a certain seductive logic to Gatenby’s idea; it chimes in harmony with the more systemic approaches we’re starting to take to agriculture and the environment, for example. Obviously, there’s a lot of research to be done to check whether or not he’s on to something, but the prospect of higher cancer survival rates using the drugs and treatments we already have to hand is a heartening one. [image by euthman]