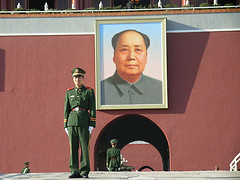 The last week or so has seen a number of stories regarding today being the anniversary of the Tiananmen Square massacre in China, many of them focussing on the sad but unsurprising fact that the Chinese government has locked down access to a swathe of web tools (like Twitter) and news sites (like HuffPo) in anticipation of its citizens talking about a subject on which it is still hugely touchy.

The first question I asked myself was “how effective will that be, anyway?” I’m obviously not the only person to wonder the same thing – though it seemed my initial optimism was unfounded, as BoingBoing linked to a short post by Beijing-based journalist James Fallows, who reports that knowledge of the Tiananmen protests among young Chinese is virtually non-existent:

I have spent a lot of time over the past three years with Chinese university students. They know a lot about the world, and about American history, and about certain periods in their own country’s past. Virtually everyone can recite chapter and verse of the Japanese cruelties in China from the 1930s onward, or the 100 Years of Humiliation, or the long background of Chinese engagement with Tibet. Through their own family’s experiences, many have heard of the trauma of the Cultural Revolution years and the starvation and hardship of the Great Leap Forward. But you can’t assume they will ever have heard of what happened in Tiananmen Square twenty years ago. For a minority of people in China, the upcoming date of June 4 has tremendous significance. For most young people, it’s just another day.

Similar sentiments crop up in a series of PBS interviews with journalists and experts in Chinese sociology [via MetaFilter], though there is some hope as well – here’s author and journalist Jan Wong:

I don’t know what it tells you about a country when you could have such a cataclysmic event as Tiananmen Square and then suddenly you lop off the reality for all the people coming after. … But the great thing about China is that history is valued so that it will come out one day. People will keep records, people will eventually write about this. It’s not that it’s disappeared forever. You know, in Chinese history, each dynasty has secrets that it suppresses, and then it’s up to the next dynasty to write the true history of the previous dynasty. Each dynasty writes its own propaganda, the next dynasty writes the true history, so I assume this will happen in China, too.

But how long will we have to wait for this to occur? Has the old cultural chain of the dynasties been snapped by the Communist Party’s ubiquitous censorship, or is it just another Emperor in different clothes?

Of course, one of the great claims about the internet is John Gilmore’s belief that it “treats censorship as damage and routes around it”; whether that is still the case (or if it ever was) is a subject for debate, but it’s reasonable to suggest that the internet must be a difficult beast to cage, even with the immense amount of manpower available to the Chinese government. China specialist Orville Schell suggests that China is the ultimate test of Gilmore’s aphorism:

We do have some interesting wild cards, like the Internet, and I think the Internet is fundamentally a liberalizing force. But I think China, in this regard, is the great petri dish for whether the Internet can be brought to heel, or whether it is, on the face of it, a sort of spontaneous free agent that will catalyse China into a more open direction. And I think the returns are not in yet. China needs the Internet, and it’s using it to good effect in business. And the Party is using it very effectively to help communicate with the provinces, the counties, the police units, the army. It isn’t purely an engine of dissident energy or of individualism or of democracy. We’ve seen many technologies from telegraph to radio to television that have been brought to heel quite nicely by commercial interests. So we’ll see.

Now you can’t control the Internet completely. I don’t even think that’s their aspiration in China. But their aspiration is to make it difficult enough for most people so that they’ll stay within the confines of the intranet, not the Internet. The intranet being China’s sort of hermitically sealed room, which is connected to the outside world by a very limited number of gateways. And it is through those gateways, that all the information to the outside world flows, both ways, and that’s where it can be controlled.

As with so many things, only time will tell. But I find myself wondering about the curiosity that is so much a part of being a young adult, at least here in the West – can censorship and obfuscation have really erased that completely among China’s young citizens? Would they not notice the increase in website blocking and wonder what is being hidden so carefully, like a child told to stay out of the cupboard under the stairs as Christmas approaches?

Maybe I’m more optimistic than I thought – I imagine that knowledge of the Tiananmen massacre isn’t as rare as it might appear to outside eyes, perhaps passed around in secret by good old word of mouth, quiet whispers and hand-written notes guarded closely against the surveillance of the state, a tiny precious flame shielded against the wind and rain, never shown to outsiders for fear that to do so would incur the wrath of the Party.

Or maybe I’m being naive; perhaps curiosity is easily quenched. After all, it’s not as if the ‘free’ West isn’t full of people who cultivate their own ignorance of political history, so as to avoid having to ask themselves awkward questions about the way the world works. [image by Gene Zhang]