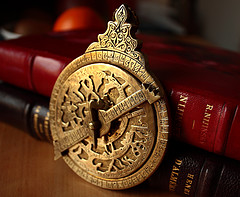 There are those who’d like us to believe that the Islam has brought nothing but violence and ignorance to the world, but they couldn’t be further from the truth. Indeed, while Christian Europe was wallowing in the so-called Dark Ages, Islamic scholars were refining the scientific method, developing the forerunners of modern medicine and making huge strides in mathematics.

Wired has a brief article mentioning just three Islamic inventions, but as a commenter there points out, there’s far more to be found in the Wikipedia article on the subject. I can also heartily recommend Ehsan Mahsood’s Science and Islam: a History, an accessible condensing of a recent BBC series on the subject that makes a great starting point from which to explore a fascinating and largely ignored chunk of world history. [image by austinevan]