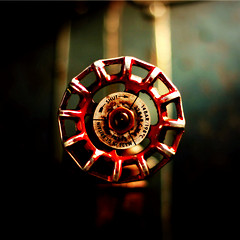 Despite its association with a bygone era of anachronistic and bulky (but very stylish) technology, steam power is making a comeback thanks to stimulus money from the US government. Combined Heat and Power (CHP) systems are appealing to large organisations because of the efficiency they offer, but the same logic could apply to more domestic situations as well:

Today, most of the time, we make electricity and generate heat in different places. We get our electricity for lighting and power from a central station located far away and transmitted to us through the grid. Heating or cooling, on the other hand, is often accomplished with on-site boilers or electric radiators. Both systems work less efficiently when they stand alone. Together, waste heat generated during the process of making electricity can be scavenged and piped around to provide climate control.

Makes sense, right? It sure does – and it’s environmentally sound as well.

A DOE report released late last year found that CHP was already responsible for reducing American emissions by 248 million metric tons of CO2, which is equivalent to taking 45 million cars off the road. That’s a lot more than wind, solar or any of the other renewables. They have such a big impact because they effectively double the amount of work that we get from burning the same amount of fossil fuel.

With the extra impetus to reduce carbon dioxide emissions to combat global warming, these electric plants that also use their excess heat could experience a lot more growth over the next 30 years. To do so, though, they have substantial challenges to overcome.

For one, many of the regional benefits of CHP are not recognized by existing environmental and utility regulations. Utilities resist CHP systems because they complicate their transmission infrastructure and they say that’s costly. And people have grown used to having their power generated in some far off place and often object to the installation of a power plant nearby.

Ah, good old NIMBYism… but perhaps those complaints will be fainter once the markets have made fossil fuels into ludicrously expensive commodities again. [image by waddie]

It’s interesting to note yet another field of concern and endeavour where the solution might involve a move back from centralised provision to localised. Economics, politics and now energy… is it time for the return of the city-state?