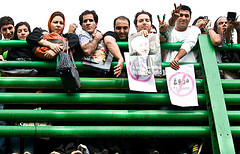 2 thoughts on “The Iranian elections: is democracy viral?”