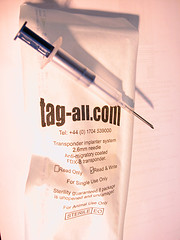 Causing a bit of a stir over in Germany is a patent filed by a Saudi Arabian gentlemen for a form of subcutaneous RFID chip which would allow remote global tracking of the person into whom it was injected.

The patent application – entitled “Implantation of electronic chips in the human body for the purposes of determining its geographical location” – was filed on October 30, 2007, but was only published until last week, or 18 months after submission as required by German law, she said.

“In recent times the number of people sought by security forces has increased,” the Jeddah-based inventor wrote in his summary.

Not too shocking on the surface, but it was one of the optional upgrades that caused the law firm representing the application to drop the case quickly:

After subcutaneous implantation, the chip would send out encrypted radio waves that would be tracked by satellites to confirm the person’s identity and whereabouts. An alternate model chip could reportedly release a poison into the carrier if he or she became a security risk.

Cute… thankfully the German patent system would probably have bounced the application on ethical grounds, but you don’t need a patent to make or use something like this.

And as science fictional as it blatantly is, it’s the political implausibility that stands out rather than the technological. Sadly, chipping people like we tag pets is likely to become quite the fashion in the more repressive nation-states of the world, but there’s certain to be a lively black market trade in removing and deactivating them too. [via Technovelgy; image by Nadya Peek]