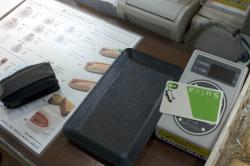 Will the economic crisis hasten the arrival of the long-promised cashless society? It’s an idea that has legs – at least in Japan, where the government thinks getting rid of cash might make their economy easier to manage. [via Technovelgy; image courtesy Jan Chipchase]

Other extreme ideas mooted by the financial authorities include a tax on physical currency or introducing one to operate alongside the yen.

All three ideas are based on a theory concerning interest rates and the concept that a nominal rate of zero — as Japan has now lived with for much of the past decade — may be too high. In Japan’s case, the theory would suggest that nominal rates of -4 per cent might be closer to what is required to rescue the economy from another deflationary spiral. Having agreed that this might be necessary, the next question is how it could be imposed.

Several MPs in the ruling Liberal Democratic Party believe the abolition of cash, though politically radioactive, might be technically feasible. Richard Jerram, a senior economist with Macquarie bank, told investors that “the proposal has become practical with the broad penetration of electronic money and credit cards in Japan”.

He said that all the proposals were radical but worth consideration for Japan. Without physical cash, a central bank can set rates exactly where it likes, runs the argument. Mr Jerram said: “At the heart of the problem of achieving negative nominal interest rates is the idea that physical currency is an anonymous bearer bond with a nominal interest rate of zero.” While a central bank can impose positive or negative rates on non-physical assets, transmitting those rates to physical currency is a huge challenge. By permanently removing cash from a system, he added, policymakers are robbed of the excuse that zero is the lowest that nominal rates can go as a deflation-fighting tool.

I’m no economist, so I have no idea whether this idea is genuinely workable, nor what the side-effects might be. But surely, no matter how deep the penetration of electronic fund transfer systems may be, there’s going to be a demographic or two at the bottom of the stack who’ll suffer at the change-over…

… but then again, maybe not. Africa has taken to electronic money like a duck to water, and as mentioned before cash comes with its own hidden costs for the end user. Whether or not the reduction in costs created by abandoning cash would be passed on to the end user remains to be seen, but you’ll excuse me if I don’t hold my breath.

But here’s your science fictional brain exercise for the day: imagine you’re a drug addict living in a society with no cash. How do you buy your fix without the transaction being visible to the system?

7 thoughts on “Japan to ditch cash?”