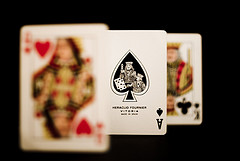 A fascinating article in the FT magazine over the weekend on the ongoing arms race between those who program the software bots in online gaming rooms, one Martin Smith, and those who play against them:

These are contests that take place on constantly shifting terrain. Smith releases his latest version of a program: it wins for a couple of weeks, then the humans figure out how to beat it and they win for a couple of weeks while Smith goes away and works on his software – algorithms, probability calculations, search techniques – and scratches his head. Then he comes back with a new version of the program that wins for a couple of weeks, while the humans go away and think about it. “We have this ratcheting up,” Smith says. “It’s a very intellectually rewarding thing.”
…
“There’s a very big difference between computer intelligence and human intelligence. This is clearly indicated in games. Back in the ’70s, it was considered that in order to get computers to play chess like a grandmaster, they had to think like grandmasters. That turned out to be wrong. Computers can play fantastic chess and they don’t do anything remotely like what human grandmasters do.”

It is interesting how the upgraded software eventually becomes beatable after sufficient practice by large groups of humans. It’s also interesting for the insight into what a particular flavour of AI researchers actually spend their time doing.

On the distinction between mind and computers, this article at The New Atlantis makes for an interesting read.

One thought on “AI up the game”