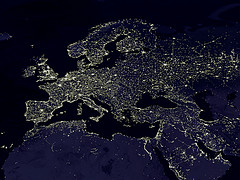 Well, maybe ubiquitous global surveillance isn’t all bad. Remember that big load of tanks and armaments that Somalian pirates scored from a Ukranian cargo ship and subsequently ransomed back? Well, two magazine reporters used commercial imaging satellites to chase down their final destination, proving in the process that they were en route to the breakaway government of South Sudan:

Images captured by DigitalGlobe satellites in March 2009 showed 33 tanks parked at Kahawa Barracks northeast of Nairobi. In parallel, satellite imagery captured from southern Sudan showed tracked vehicles, parked under camouflage, at a Sudan People’s Liberation Army (SPLA) compound northeast of Juba, the capital of South Sudan. Jane’s observed that SPLA attempts to conceal the location “were deliberate and masterful, but dimensional analysis, tracked-vehicle scarring and the staging of three vehicles in a tactical perimeter established the concealed vehicles as tanks.”

It’s not particularly good news – governments tooling up for nasty regional conflicts never is – but it’s the sort of news we’re better off having than not. Maybe the UN should be funding more similar satellites so as to keep an eye on governments who are somewhat economical with the truth about their military build-ups? [image by woodleywonderworks]

Maybe we could use them to keep Obama and Medvedev honest with regards to their nuclear disarmament agreement… provided the whole thing isn’t a carefully orchestrated publicity play in the first place, natch.