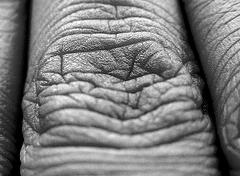 Got epidermis? Researchers at the Fraunhofer Institute in Germany sure have – they’ve developed an automated system for producing two-layer artificial skin at a commercial scale:

The process starts with small pieces of skin, which are sterilised and then cut into pieces, modified with enzymes and isolated into two cell fractions. These are then grown separately on cell culture surfaces, before being combined into a two-layer sheet. The whole process takes about three weeks.

The flexible lower layer gives the tissue natural elasticity, but two-layer skins have until now been too expensive to mass produce.

The synthetic skins currently available are eventually rejected by the human body because they don’t contain blood vessels. Jörg Saxler, Fraunhofer’s technology manager, told Wired.co.uk that they have created skin with blood vessels using pig cells, and are working on a fully synthetic version.

Obviously the first take-up of this stuff will be medical in nature – grafts for burn victims, so on and so forth. But once it gets cheaper, the street will find its own use for the same technology. First up will be rough-and-ready elective cosmetic grafts: replace your aged original skin, or maybe go patchwork with different shades and levels of melanin!

But some sort of generic off-the-shelf skin won’t be sufficient for the glitterati. Will we be able to buy celebrity-endorsed brands and strains of skin? Will famous models and musicians have their skin cloned as the ultimate high-price catalogue-cap of their personal clothing labels? Will you be able to literally wear Armani or Hugo Boss or 50-Cent? [image by /charlene]