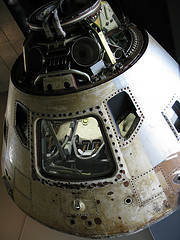 3 thoughts on “Did the Apollo landings lead to science fiction’s decline?”