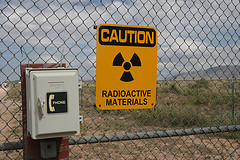 Hey, great news! A group of researchers have discovered a medicine that can alleviate the damaging effects of radiation sickness… at least in mice and monkeys:

The first series of tests included experiments on more than 650 monkeys. Each test featured two groups of monkeys exposed to radiation, but only one group was given the medication. The radiation dosage was equal to the highest dosage sustained by humans as result of the Chernobyl mishap.

The experiment’s results were dramatic: 70% of the monkeys that did not receive the cure died, while the ones that survived suffered from the various maladies associated with lethal nuclear radiation. However, the group that did receive the anti-radiation shot saw almost all monkeys survive, most of them without any side-effects. The tests showed that injecting the medication between 24 hours before the exposure to 72 hours following the exposure achieves similar results.

Isn’t that brilliant news? Think of all the great things we could achieve if we could prevent radiation from damaging the human body! As its lead hook, Ynetnews gleefully trumpets about the geopolitical edge that this medicine will give to Israel in dealing with their ongoing paranoia about uppity Muslims with nuclear weapons, but follows with a more broadly humanitarian application:

Gudkov’s discovery may also have immense implications for cancer patients by enabling doctors to better protect patients against radiation. Should the new medication enable cancer patients to be treated with more powerful radiation, our ability to fight the disease could greatly improve.

Think also of clean-up operations in locations with similar problems to Chernobyl, or time spent in space beyond the Earth’s handy and life-saving magnetosphere. The list of places that people can’t go just got shorter. [via SlashDot; image by 7263255]

12 thoughts on “A cure for radiation sickness?”