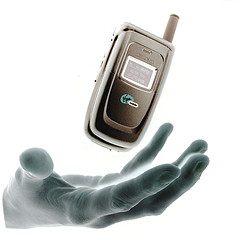 Ever find yourself wishing your phone could run the same software as your home computer? Well, at least they are now both susceptible to becoming part of a botnet, as the first known centrally-controlled mobile phone virus has been spotted in the wild:

Sexy Space uses text messages reading “A very sexy girl, Try it now!” to jump between phones. The messages contains a link that, when clicked, asks the user to download software which, once installed, sends the same message to contacts stored in the phone.

Similar SMS viruses have been seen before. But Sexy Space is unusual in that it also communicates with a central server and can thus be controlled by the hackers who created it – the feature that gives conventional botnets their power. If the network of infected phones is seen to be responding to remote commands, it can be described as a true botnet.

Brilliant. Given that recent research suggests more than 50% of computer users have clicked on a link in a spam email, we can evidently look forward to our back pockets being the next frontier for badly-spelled importunings from bootleg pharmacies and an inconceivable number of non-existent Nigerian government officials. [image by Bah Humbug]

[The first smug Apple fanboy to post an evangelical comment will incur the wrath of my crack team of Estonian DDOS experts. If the capability to not have to use your common sense to avoid viruses is really worth the hardware premium you pay for the privilege, I suggest basking silently in the glow of your own self-satisfaction.]