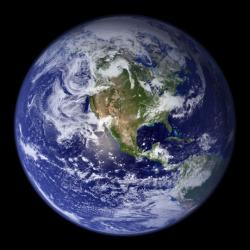 Space exploration tends to be a black-and-white debate, with interested parties falling into either enthusiastic advocacy or strident denouncement. But as with most things, there’s a considerable middle-ground to explore – and over at the Washington Post, Kim Stanley Robinson brings the humanist pragmatism as he argues that space exploration is a worthy goal provided it helps us become a species that doesn’t have its finger hovering perpetually over the self-destruct button:

Eventually, if things go well on Earth, we may begin to inhabit the moons and planets of the solar system more completely, with populations living their entire lives off Earth. At this stage, Mars will always loom as the best candidate for a viable second home. If we alter that planet by importing Earth’s organisms into a rehydrated Martian landscape, that would make it safer for us to live there long-term. These big possibilities, described at length in my Mars novels, will make the planet one of the best 22nd century answers to the question, “Why space?”

And later, if things are still going well on Earth — always the necessary condition — we might live throughout our solar system. This civilization would be a great thing, as a healthy Earth would have to exist at its heart. But given all we have to do first, the full flourishing of such a civilization is surely centuries away.

So why even talk about this? Because it is useful to take the long view from time to time. This is what science fiction does, and though science fiction has been bad about space, it has been good about time. Taking that long view, we no longer seem like the most sophisticated culture ever; indeed, much that we do now will look silly or even criminal in the future. The long view also reminds us that we are a species only about 100,000 years old, evolving on a planet where the average lifetime of a species is 10 million years. Unless we blow it, humans are going to be around in 1,000 years — and if we make it that far, it’s likely that we’ll last much longer than that.

So, what actions, taken today, will help our children, and theirs, and theirs? From that perspective, decarbonizing our technology and creating a sustainable civilization emerge as the overriding goals of our age. If going into space helps achieve those goals, we should go; if going into space is premature, or falls into the category of “a good idea if Earth is healthy,” it should be put on the science fiction shelf, where I hope our descendants will be free to choose it if they want it.

What do you think? Is escaping the gravity well a means to an end in itself, or should we concentrate on tidying up our own back yard before heading out into the local neighbourhood? [via BoingBoing; image courtesy NASA]