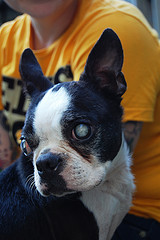 As medical technology advances, the benefits can trickle down the hierarchy of species. Point in case: a German company developing custom-made contact lenses for animals who develop severe cataracts:

The acrylic intraocular lenses are implanted into animals’ eyes when their vision has clouded to the point of total impairment, and are fitted for various species, from cat-eye-sized to fist-width for rhinos.

“Cataracts generally means blindness for animals, unlike for humans,” said the head of the company’s veterinary division, Ingeborg Fromberg.

“And because animals have short life spans, it means losing quality of life in a greater share of that life.”

Since its launch in 2008, the firm has fielded calls from Sea World in San Diego (a sea lion who had trouble performing his tricks due to severely blurry vision), an Australia nature park (a blind kangaroo) and a Romanian zoo (a visually impaired lioness).

The German lenses have helped turn the lights back on for dozens of house pets, racehorses, circus animals, guide dogs — literally preventing the blind leading the blind — and even wild creatures roaming nature reserves.

I wonder if it’s an inevitable behaviour for a cyborg race to cyberneticise its “client” species? The animal uplift lobby might say that it’s a duty rather than a choice. [via grinding.be; image by Andy McLeod]