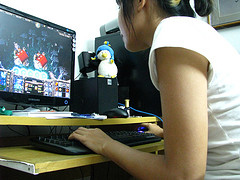 Computer games, especially persistent MMOs like World of Warcraft, are highly addictive – or so we’re told, albeit principally by people with money to make from treating said addiction. Indeed, gaming addiction is such a potentially lucrative market debilitating social cancer that psychiatrists want to form their own guild and start treating WoW addicts within the framework of the game itself. [via TechDirt; image by jerine]

Yes, you read that correctly. Treating people for MMO addiction. In an MMO.

Dr Graham said that some players were so addicted to these massively multiplayer online games that they played them for up to 16 hours a day, leading them to neglect their social lives and education.

He has called on Blizzard Entertainment, the company that makes World of Warcraft, to waive or discount the costs associated with joining the game so that therapists can more easily communicate with at-risk players in their preferred environment.

“We will be launching this project by the end of the year. I think it’s already clear that psychiatrists will have to stay within the parameters of the game. They certainly wouldn’t be wandering around the game in white coats and would have to use the same characters available to other players,” said Dr Graham.

“Of course one problem we’re going to have to overcome is that while a psychiatrist may excel in what they do in the real world, they’re probably not going to be very good at playing World of Warcraft.

“We may have to work at that if we are going to get through to those who play this game for hours at end.

Now, forgive me if I’m wrong, but isn’t this more than a bit weird? If an expert in alcohol addiction started saying “well, we think we should start drinking in bars so we can really reach the people who need our services, and moreover the bar owners should let us drink for free. Granted, we don’t really have a taste for alcohol ourselves, but I’m sure we’ll pick it up eventually if it’s for the good of the patient,” they’d be discredited immediately, right?

I suspect the real story here is one of psychiatry quacks chasing the hard-to-win money of middle-class parents who don’t understand their kids and who think that there must be a treatable medical reason for that… which is a market that will probably never completely die off, sad to say.