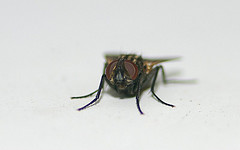 Proof, if such were needed, that science is awesome and strange in equal measure: have you ever wondered how the hell flies can so effectively dodge your every effort to swat them? Sure you have – but you don’t have a lab full of stuff that you could use to find out the answer. The biologists at the Max Planck Institute for Neurobiology do, however, so they’ve built a flight simulator and wired it into the brain of an immobilised blowfly.

As the fly responded to virtual objects flying around it, the scientists used a fluorescent microscope to watch how its brain processed the images. Compared to people, who can distinguish a maximum of 25 discrete images per second, blowflies are visual virtuosos: They can sense up to 100 separate images per second and respond fast enough to change their flight direction.

No mention of any progress on discovering why flies, despite their incredible visual acuity, spend hours battering themselves against a closed window when there’s an open one right next to it… [image by dafydd359]