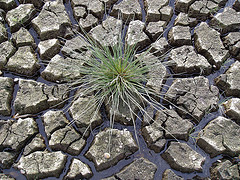 Now the bad news: it’s not always a positive change, as serendipitously discovered by Arthur Weis of the University of California:

When a severe drought struck southern California, Weis realized that he could use the extra bucket of seeds for an experiment. In 2004 he and his colleagues collected more field mustard seeds from the same sites that Sim had visited seven years earlier. They thawed out some of the 1997 seeds and then reared both sets of plants under identical conditions. The newer plants grew to smaller sizes, produced fewer flowers, and, most dramatically, produced those flowers eight days earlier in the spring. The changing climate had, in other words, driven the field mustard plants to evolve over just a few years. “It was serendipity that we had the seeds lying around,” says Weis.

The article continues with a lengthy examination of the plasticity of lifeforms – their ability to change swiftly in response to environmental conditions. Recent research is putting the lie to the original Darwinian view of evolution as something that operates at a glacially slow pace, and strongly suggesting that climate change – regardless of cause – may be one of the most important factors in evolutionary change. Whether the increasing pace of climate change will be reflected by a stronger and faster response from natural selection remains to be seen. [image by Andyrob]

This pretty much underlines what I think a lot of us know deep down; whatever happens, the Earth and its biosphere will survive. Whether we get to remain a significant component of it is still an open question.