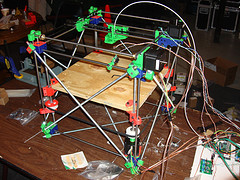 Jamais Cascio appears over at Fast Company once again, this time talking about the desktop manufacturing revolution, which seemingly becomes a less science fictional prospect by the week. The shift in plausibility is noticeable in the concerns raised: consider a still-distant technology like nanoassemblers or sentient AI, and you’ll get the species-killer existential risks – grey goo, say, or a hard unfriendly singularity. Ubiquitous fabbing is inevitable enough to be raising more realistic and (by comparison) small-scale concerns… like what the hell it’s going to do the economy. [image by Zach Hoeken]

Technologies that shift production from being atom-dominated to being bit-dominated tend to follow similar trajectories. With both laser printers and, later, CD/DVD burners, the first wave of “creative destruction” came when the prices dropped to the level where the devices were affordable by small businesses; the second, bigger wave came when the prices dropped to a level affordable by general households. Now, laser printers and CD/DVD burners are just about free in a box of cereal–and, for many of us, the production and consumption of text documents and music has moved to entirely digital formats.

If 3D printing follows a similar trajectory, we may not be likely to see a massive shift to entirely digital “products” any time soon, but we could well see a shift to more local–even desktop–production. There’s no guarantee, of course, that 3D printing system prices will crash in the exact same way as laser printers, or that individual households will decide that desktop manufacturing is appealing. Local manufacturing seems a good bet, however, for a variety of reasons. There’s a particularly strong sustainability argument around local manufacturing, from the rising tide of “localism” philosophies (from food to media), to the ability of 3D printing to extend the useful life of manufactured goods by making new parts (as Jay Leno does for his vintage cars). The sustainability argument will become especially powerful once cheap overseas-produced goods reflect rising costs for fuel and carbon. And local manufacturing via 3D printing, even if limited to simple consumer items, has the potential to disrupt incumbent manufacturing, shipping, and retail industries.

If we do see 3D printing follow the footsteps of laser printing, however, the results could be profound. Desktop manufacturing offers the potential for the ultimate “maker” culture, where commercial products are bought off of iTunes-like online stores and printed at home, while eager hardware hackers play with design tools and open-source hardware systems to make entirely new material goods. Lurking in the background, of course, is the potential for design piracy — what one writer termed “napster fabbing,” back in the era when Napster was scary.

It remains to be seen what actually happens, but severe disruption of the status quo is pretty much a given. What do you think – will ubiquitous fabbing usher in a utopian future of happy people making interesting stuff, or a world crammed with cheap and poorly-made junk?

One thought on “Welcome to the 3D economy”