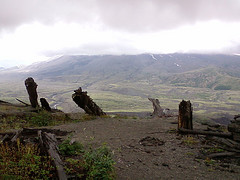 In order to keep a close eye on Mount St. Helens, the NASA JPL people have built and deployed a bunch of networked “spiderbots” which negotiate a peer-to-peer network between each other in order to pass data back to base.

Fifteen spiderbots, so-named because of the three spindly arms protruding from their suitcase-sized steel bodies, were lowered from a helicopter to spots inside the crater and around the rim of Mount St Helens, an active volcano in the US state of Washington, in July.

Each has a seismometer for detecting earthquakes, an infrared sensor to detect heat from volcanic explosions, a sensor to detect ash clouds, and a global positioning system to sense the ground bulging and pinpoint the exact location of seismic activity.

Once in place, the bots reached out to each other to form what is known as a mesh network. “It’s similar to the internet,” says Steve Chien, the principal scientist for autonomous systems at JPL. “You just lay them out, and they figure out the best way to route the data.”

Smart idea: install a remote monitoring system and instruct it to drop you a line with any problems… up to and including any problems with the system itself as well as the volcano, one assumes.

Obviously the expense means that this sort of system is currently only of use in high-risk and high-budget applications, but it’s no great mental stretch – given the rapid advances of networking technology – to imagine entire states or countries blanketed with similar monitoring frameworks.

Then make the data public, bolt on an API and distribute something like the SETI@home software, and everyone with some spare processor cycles can help keep an eye on geological instabilities. Similar systems (or perhaps even the same devices) could be used to provide communications infrastructure in the aftermath of a disaster, too. [image by christmaswithak]

4 thoughts on “Joe Robot vs. the Volcano: the spiderbots of Mount St Helens”