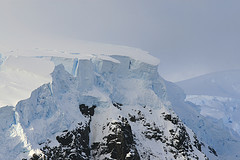 No human has ever set foot on Ridge A, 4,053m up the Antarctic Plateau. But a U.S.-Australian team collating satellite, ground-station, and climate-model data thinks it’s the coldest, driest place on the planet–and therefore the best place on Earth to set up an astronomical observatory.

The study revealed that Ridge A has an average winter temperature of minus 70C and that the water content of the entire atmosphere there is sometimes less than the thickness of a human hair.

It is also extremely calm, which means that there is very little of the atmospheric turbulence elsewhere that makes stars appear to twinkle: “It’s so calm that there’s almost no wind or weather there at all,” says Dr Will Saunders, of the Anglo-Australian Observatory and visiting professor to UNSW, who led the study.

“The astronomical images taken at Ridge A should be at least three times sharper than at the best sites currently used by astronomers,” says Dr Saunders. “Because the sky there is so much darker and drier, it means that a modestly-sized telescope there would be as powerful as the largest telescopes anywhere else on earth.”

It’s not the first time Antarctica has been proposed as a site for stargazing:

Interest in Antarctica as a site for astronomical and space observatories has accelerated since 2004 when UNSW astronomers published a paper in the journal Nature confirming that a ground-based telescope at Dome C, another Antarctic plateau site, could take images nearly as good as those from the space-based Hubble telescope.

Last year, the Anglo-Australian Observatory completed the first detailed study into the formidable practical problems of building and running the proposed optical/infra-red PILOT telescope project in Antarctica. The 2.5-metre telescope will cost over AUD$10million and is planned for construction at the French/Italian Concordia Station at Dome C by 2012.

I confess I haven’t read Kim Stanley Robinson’s novel Antarctica, but I’d be surprised if he missed this. But writers looking for a setting should find the neighborhood isn’t too crowded. Bring your mittens.

One thought on “The coldest, driest place on Earth would be a great place for an astronomical telescope”