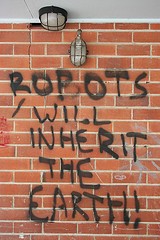 There are plenty of artificial intelligence skeptics out there, but few of them would go so far as to say that AI is a dangerous dream leading us down the road to dystopia. One such dissenting voice is former AI evangelist and robotics boffin Noel Sharkey, who pops up at New Scientist to explain his viewpoint:

It is my contention that AI, and particularly robotics, exploits natural human zoomorphism. We want robots to appear like humans or animals, and this is assisted by cultural myths about AI and a willing suspension of disbelief. The old automata makers, going back as far as Hero of Alexandria, who made the first programmable robot in AD 60, saw their work as part of natural magic – the use of trick and illusion to make us believe their machines were alive. Modern robotics preserves this tradition with machines that can recognise emotion and manipulate silicone faces to show empathy. There are AI language programs that search databases to find conversationally appropriate sentences. If AI workers would accept the trickster role and be honest about it, we might progress a lot quicker.

NS: And you believe that there are dangers if we fool ourselves into believing the AI myth…

It is likely to accelerate our progress towards a dystopian world in which wars, policing and care of the vulnerable are carried out by technological artefacts that have no possibility of empathy, compassion or understanding.

Now that’s some proper science fictional thinking… although I’m more inclined to a middle ground wherein AI – should we ever achieve it, of course – comes with benefits as well as bad sides. As always, it’s down to us to determine which way the double-edged blade of technology cuts. [image by frumbert]

2 thoughts on “The dangerous dream of artificial intelligence”