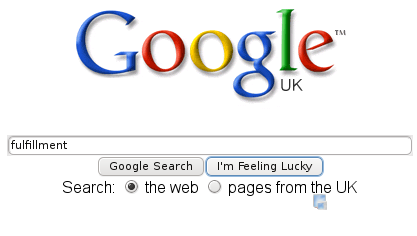 Do you find yourself compulsively searching for things on the internet even when you don’t really need to know them? Do you get caught in the infamous Wikipedia rabbithole, popping over there to look up a musician’s name only to find yourself two hours later scrolling through a lengthy treatise on the socio-political history of the Austro-Hungarian Empire?

I know I do… and Professor Kent Berridge reckons he knows why. Apparently the parts of our brain that are wired for seeking are separate to those wired to respond pleasurably to finding; the latter provokes the production of opioids, but the urge to search is more like the perpetually unfulfilling loop of amphetamine craving.

For humans, this desire to search is not just about fulfilling our physical needs. Panksepp says that humans can get just as excited about abstract rewards as tangible ones. He says that when we get thrilled about the world of ideas, about making intellectual connections, about divining meaning, it is the seeking circuits that are firing.

The juice that fuels the seeking system is the neurotransmitter dopamine. The dopamine circuits “promote states of eagerness and directed purpose,” Panksepp writes. It’s a state humans love to be in. So good does it feel that we seek out activities, or substances, that keep this system aroused—cocaine and amphetamines, drugs of stimulation, are particularly effective at stirring it.

Ever find yourself sitting down at the computer just for a second to find out what other movie you saw that actress in, only to look up and realize the search has led to an hour of Googling? Thank dopamine. Our internal sense of time is believed to be controlled by the dopamine system. People with hyperactivity disorder have a shortage of dopamine in their brains, which a recent study suggests may be at the root of the problem. For them even small stretches of time seem to drag. An article by Nicholas Carr in the Atlantic last year, “Is Google Making Us Stupid?” speculates that our constant Internet scrolling is remodeling our brains to make it nearly impossible for us to give sustained attention to a long piece of writing. Like the lab rats, we keep hitting “enter” to get our next fix.

That study has implications for drug addiction and other compulsive behaviors. Berridge has proposed that in some addictions the brain becomes sensitized to the wanting cycle of a particular reward. So addicts become obsessively driven to seek the reward, even as the reward itself becomes progressively less rewarding once obtained. “The dopamine system does not have satiety built into it,” Berridge explains. “And under certain conditions it can lead us to irrational wants, excessive wants we’d be better off without.” So we find ourselves letting one Google search lead to another, while often feeling the information is not vital and knowing we should stop. “As long as you sit there, the consumption renews the appetite,” he explains.

At least I now know why I was up until 2am this morning… but hey, I could have stopped any time I chose to, man. [via MetaFilter]

But perhaps framing the urge to search as a purely mechanistic behaviour isn’t entirely fair… because it has its benefits, especially for those of us whose work revolves around the uncovering of new knowledge. Here’s Lisa Gold – researcher to Neal Stephenson, among others – extolling the virtues of browsing, which she defines as being different to searching in both focus and utility:

Browsing and searching are different– browsing is about the journey, searching is about the destination. Searching is focused on finding specific information quickly and often leads to tunnel-vision, which can prevent you from recognizing useful sources that don’t match your preconceived ideas and assumptions. Browsing is about slowing down, opening your eyes, feeding your curiosity, and allowing yourself the opportunity to make discoveries.

I believe it’s important to set aside time to browse on a regular basis– not just on the web, but in the physical world as well. Spend time exploring different bookstores (both new and used), visit libraries and museums, and search out unusual places you’ve never visited. Take a different route, walk around neighborhoods you don’t live in, look for hidden treasures.

One thought on “Search is the drug”