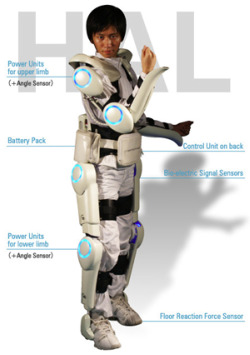 If you’ve got some protracted heavy lifting to do in your garden, or if you just fancy indulging that long-running fantasy of re-enacting the cargo-lifter vs. alien queen deathmatch from the last bit of Aliens, then boy do I have some good news for you. Remember the ‘HAL’ agricultural exoskeletons we mentioned early last year? Well, they’re now available to rent to the public, according to an article in H+ Magazine:

The HAL exoskeleton […] has robotic limbs that strap to your arms and legs — providing much fuller mobility than a wheelchair. The suit’s backpack contains a battery and computer controller. When a HAL-assisted person attempts to move, nerve signals are sent from the brain to the muscles, and very weak traces of these signals can be detected on the surface of the skin. The HAL exoskeleton identifies these signals using a sensor, and a signal is sent to the suit’s power unit telling the suit to move in synch with the wearer’s own limbs.

When you consider that these are the first publically-available examples of this technology, those rental prices don’t actually seem that large in real terms – though still a bit much for the casual gardener or DIY homebuilder. Even so, Futurismic‘s own Tom James said just a little over a year ago that “it’ll be about 10 years before [exoskeletons] are available to consumers: and will probably be expensive, heavily regulated and licensed when they are“; it looks like they’ve arrived sooner, cheaper and more freely available than we expected. Though I’d have thought (or maybe just hoped) they’d look a little less like a Buck Rogers prop… [image courtesy Cyberdyne]

But in the spirit of making science-fictional predictions, I reckon it’ll be about five years before we see some sort of competitive extreme-sport deployment of the same technology… maybe the pro-wrestling scene will see exoskeletal combat as the next level in sports entertainment?

By the way, the linked article is from the web-based version of the just-published fall issue of H+ Magazine, which is always full of stuff with a distinctly Futurismic flavour – go check it out.