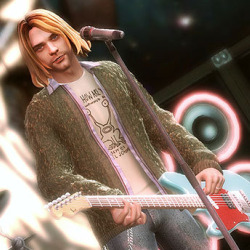 I’m guessing you’ve probably caught wind of Courtney Love’s lawsuit against Activision regarding their reanimation of the image of Kurt Cobain in the latest edition of Guitar Hero. I’ve not seen it myself, but friends have told me it’s a bit tasteless, and this particular lawsuit may be one of the more sane things Love has done in some time (even though there are protestations from Activision that she actually signed off on a contract that gave them permission to do it). [image ganked from Kotaku post under Fair Use terms; contact for immediate takedown if required]

Specifics aside, though, this raises the spectre of an issue that is only set to become more complicated – the use of someone’s image for marketing purposes when they’re no longer around to give their permission. Take it away, TechDirt:

[…] that issue is getting more and more complicated as technology gets better and better. In the last few decades, for example, there’s been a growing trend to use famous dead people, such as John Wayne, Lucille Ball and Fred Astaire in commercials. But those mostly involved taking clips of those actors from existing films/TV and splicing them into a commercial (with permission from their estates). However, as some lawyers have been noting, with better and better digital technologies, this issue is becoming more important as it’s now possible to digitally recreate someone for the purpose of film. Or, say, a video game.

Or, say, a life-size photorealistic face-mask. I’d be the first to concede that making money from the dead is a bit crass – especially from as tragic a figure as Cobain – but is Activision being any more crass than Love and the Cobain holding companies she controls? Who gets to decide what’s appropriate, what’s tasteful?

There’s always going to be a price at which someone’s moral stance becomes less rigid, after all, and the dead can’t hang around to complain… not until we’ve cracked personality uploads or Turing-compliant simulations, anyway. And even then, would the electronic personality be considered legally the same person as the no-longer-living meat-machine?

And just to add an extra fillip of weirdness, consider the results of a recent experiment at Warwick University here in the UK, which shows that doctored video footage can easily persuade eyewitnesses that they saw something which never actually occurred. [via FuturePundit]

The legal implications are a bit nasty – especially in a country as saturated in CCTV cameras as this one – but let’s look at the light side: how much fun would it be to convince your best friend that he was so steaming drunk at his own birthday party that he missed Kurt Cobain wandering through the front room trying to bum cigarettes from people playing Guitar Hero?