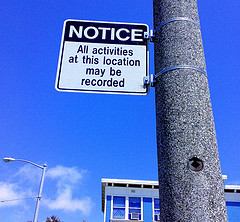 I’ve long been a cheerleader for the sort of informational transparency that our increasingly wired world seems to encourage, if not make inevitable. After all, surely a world where it’s harder for those in power or authority to lie to us behind our backs is an improvement on the status quo, right?

I still hold that view, but Russell Davies has a column at Wired UK where he suggests that an unwanted outcome of that transparency might be to erode the sorts of brash personality that create change and new ideas:

I realised the other day that this is what’s happened to me. Everything I produce, however private or NDA’d, is filtered through the voice in my head, whispering, “how would I feel if this got online?” Because a slip of the email or a misplaced YouSendIt and it could easily happen. And, mostly, that’s good; it keeps the bullshit to minimum-required levels. It’s a reality we’re all going to have to get used to. It’s sensible to assume that everything you think is private might one day be read.

And this won’t just be by accident – this will be about policy. Openness is next to godliness. Sunshine is regularly touted as the best disinfectant. It’s just that disinfectant kills good bugs as well as bad ones, and there are some healthy things that need to breed in the dark. Good, positive, non-evil ideas sometimes need to be whispered in private before they’re shouted in public. Pretentiousness is occasionally necessary among friends. And if we’re afraid to be slightly different people in private, we’ll end up with a world of well-trained Michael Owens; sincere, good-looking people with no dark side, no sins, no doubts. Media training has driven the personality out of sport – I wonder if constant, enforced openness will drive it out of everything else?

Call me cynical, but I’m not sure sport ever really had that much personality, beyond the more ornery characters having freer license to be unpleasant in public… but leaving that aside, I still suspect Davies is overstating the problem, here. Yes, sure, there are some situations where ideas have to be brewed up out of sight of the public eye for them to gel properly, and a certain level of confidentiality in personal friendships is necessary. But speaking from my own personal experience, being continually mindful of transparency has made me more considerate of the feelings of others – not to the point of changing my opinions or ideas outright, but certainly making me consider their wider ramifications and think harder about how I express them. [image by jm3]

What do you think – will ubiquitous transparency make us a species of dullards, as Davies suggests? And if it does, is that a reasonable sacrifice to make for a kinder world?

4 thoughts on “Will transparency make us boring?”