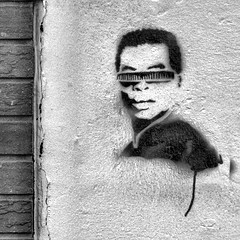 OK, so it’s going to be some time yet before Geordi LaForge video visors are high-street gadgets, but the underlying technologies are coming to fruition faster than I’d have ever expected. Via grinding.be we discover that a team at MIT have sussed a method for grafting a digital device to the optic nerve, enabling them to pipe electronically generated images direct the brain:

The implanted chip, according to the MIT team behind it, features a “microfabricated polyimide stimulating electrode array with sputtered iridium oxide electrodes” which is implanted into the user’s retina by a specially-developed surgical technique. There are also “secondary power and data receiving coils”.

Once the implant is in place, wireless transmissions are made from outside the head. These induce currents in the receiving coils of the nerve chip, meaning that it needs no battery or other power supply. The electrode array stimulates the nerves feeding the optic nerve, so generating a image in the brain.

The wireless signals, for use in humans, would be generated by a glasses-style headset equipped with cameras or other suitable sensors and transmitters tuned to the coils implanted in the head.

For now, however, the system has only been tried out in Yucatan minipigs. Three of the diminutive Mexican porkers have had the Star Trek/Gibsonesque implants for seven months, but as yet it’s difficult to tell just how well they work – as the pigs aren’t talking. The MIT boffins have fitted them with instrumented-up contact lenses to try to get an idea of what effects the implants have.

If you really need me to prompt you towards imagining the awesome and/or weird stuff that might happen as a result of this technology becoming readily available, I suspect you’re reading the wrong website. 🙂 [image by striatic]