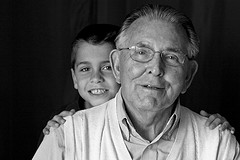 Almost as if they timed it to coincide with the just-finished Singularity Summit, a group of medical researchers published a paper last week in the prestigious journal The Lancet which shows that life expectancy in Western nations is increasing steadily, alongside quality of life in those later years. The trend shows no signs of levelling off any time soon, leading other ageing experts to hypothesise that there may be no intrinsic cap on the human lifespan. [via NextBigFuture; image by technowannabe]

The Guardian picked up the same press release and ran with it, providing us with the increasingly common spectacle of regular journalists and scientists engaging in science fictional speculation:

The bad news is that the ageing populations of rich countries such as the UK threaten to unbalance the population. It “poses severe challenges for the traditional social welfare state,” write Christensen and colleagues.

But they have a radical solution: young and old should work fewer hours a week. Over a lifetime, we would all spend the same total amount of time at work as we do now, but spread out over the years.

It is a theory that is beginning to receive “some preliminary attention”, the authors say, citing a study in the Science journal three years ago which suggested that shorter working weeks would help young people and increase western Europe’s flagging birth rate.

Shorter working weeks might further increase health and life expectancy, Christensen and colleagues write. But redistribution of work will not solve all the problems caused by a society with a large number of very old people. Beyond a certain point, the old will need younger people to look after them – although technology is likely to provide some help in advanced countries such as the UK.

The four-day week idea has been growing in strength ever since the markets nosedived about a year ago, and experiments indicate that it has lots of beneficial effects for both workers and their employers.

But once again we’re back to the issue of greying populations and sustainable reproductive rates, which looks like its going to be the meme of the season… thanks in no small part to the US healthcare debate, which – if you ignore the hot-air rhetoric and obfuscation on all sides – is largely about finding a fair way for the increasing number of elderly citizens to be supported by a diminishing number of younger workers. We’ve got no cause to feel smug on this side of the pond, either; free healthcare may be commonplace in Europe already, but it’s going to be just as stretched by demographic shifts as it will be in the States.

One thought on “The socioeconomics of human longevity”